F
ezzan, historic region of northern Africa and until 1963 one of the three provinces of the United Kingdom of Libya. It is part of the Sahara (desert) and now constitutes the southwestern sector of Libya. It is an inaccessible place full of sand seas, mountains, wadis, plateaus, oases and mysteries. In the period between 500 BC and 500 AD an estimated number of 100,000 people thrived in Fezzan doing farming, while this area receives less than an inch of rain a year, and some years, none at all.

The history of Fezzan reveals the life of people, who have been struggling for thousands of years against the change in environment, and trying to adapt accordingly. In the modern days, we accept that the past is a record which details the shifts in climate, the great migrations and the rise and fall of nations. We act and believe as if the present is the final chapter of the Sahara, but a very long tale is presented to any visitor of the Sahara which keeps reminding that the present chapter is thin and fragile.
Fezzan’s climate is extreme, with very hot summers and cool winters. Rainfall is scarce and irregular and is somewhat more plentiful in the north than in the south. Most of Fezzan’s nearly 200,000 inhabitants dwell in desert oases in the centre and south, notably in Marzuq and in Sabha. The inhabitants are of basically Arab origin, mixed with Berber and black African elements. Fezzan is noted for its extensive production of date palms, which number in the millions of trees and cover several hundred thousand acres scattered in numerous oases. Date production is supplemented by cereal, vegetable, and fruit crops.

There is a large oil field at Marzuq, and sodium carbonate is produced at both Marzuq and Sabha. The Greek historian Herodotus mentioned Fezzan as part of the territory of the Garamantes. The Romans conquered the Garamantes in 19 bc and annexed their country, which the Romans called Phazania, to the Roman Empire. In 666 the Arabs conquered Phazania and subjected it to Islam. Thereafter it was ruled by a succession of Arab and native dynasties until subdued by the Turks and made a part of the Ottoman Empire in 1842.
Emissaries of the Sanusiyah religious brotherhood began founding lodges in Fezzan in the mid-19th century and were for a time the dominant influence in the region. Fezzan was amalgamated with Cyrenaica and Tripolitania under Italian rule in 1912. In 1951 a United Kingdom of Libya was proclaimed, and the three regions remained provinces until 1963, when Libya became a unitary state

The Acacus Mountains form a mountain range in the desert ...
Read More 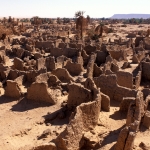 In the fertile and green Wadi al-Hayat, south of the ...
Read More 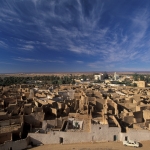 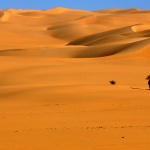 Idhan Murzuq is one of the most beautiful desert sites ...
Read More 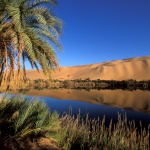 The current Ubari Lakes are a group of about 20 ...
Read More

The southwest of the Fezzan has many natural wonders such ...
Read More 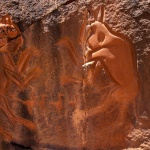 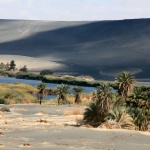